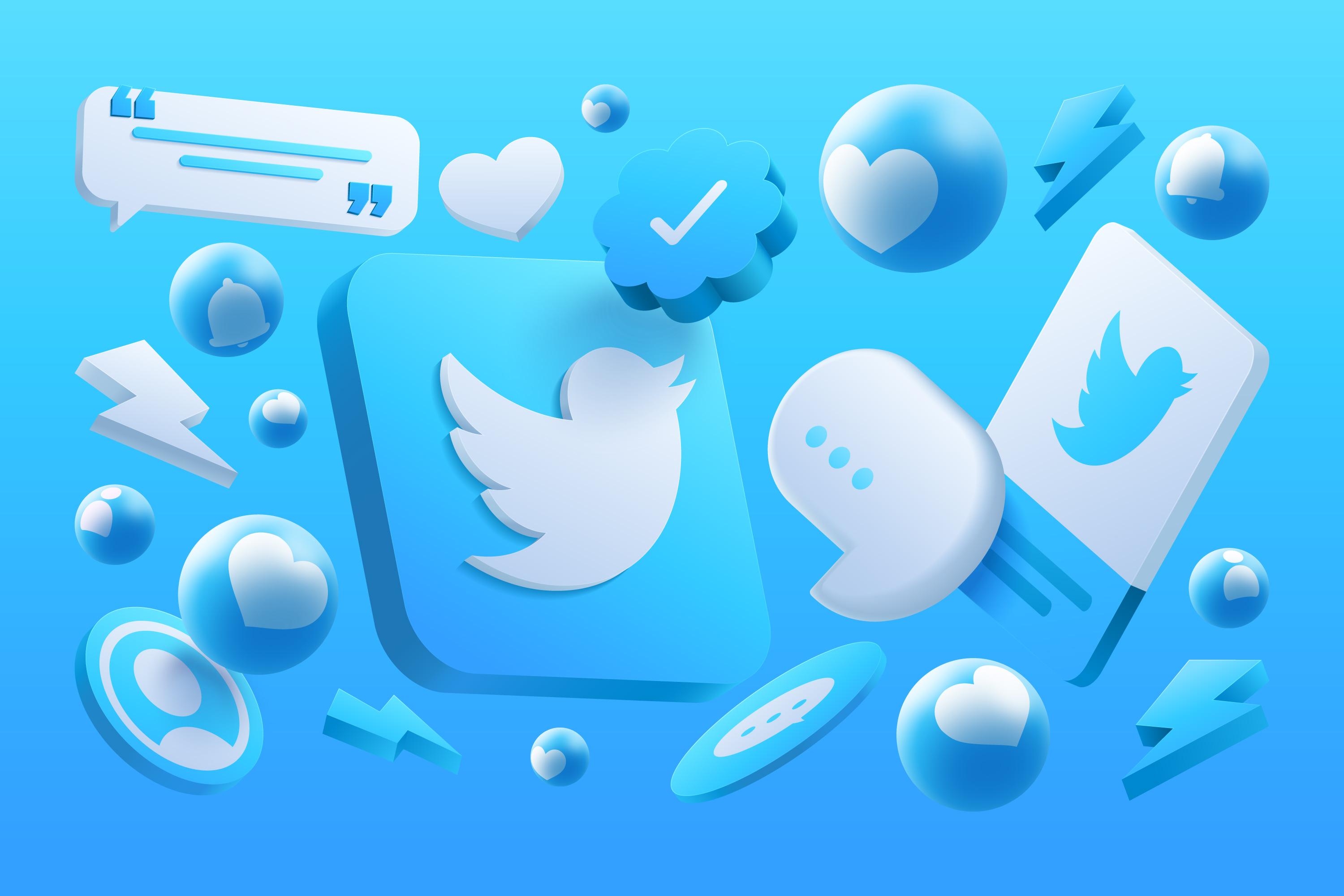 It is no longer news that Elon Musk, the founder of Tesla and SpaceX, has acquired Twitter and taken over its management of it. What is, is the effect this will have on digital advertising, or to put it another way, on Twitter advertising. Despite the fact that this is still a heated topic, Elon Musk’s purchase and ownership of Twitter seem to have promise, particularly with regard to Twitter advertising. There are a few reasons for this. One is that a phase of the microblogging platform’s gradual shift to Twitter 2.0—a phase dubbed Elon Musk’s Twitter 2.0—has been brought on by the acquisition. The acquisition-related changes or tweaks are another factor. The new Twitter blue check system, which holds great promise for Twitter advertising, is one such change.

Even though it was unclear what this meant or even portended to the millions of Twitter users when the email went viral, the very beauty of it all resides primarily in this ambiguity as it left thousands of users retweeting it and wondering what that might have meant. Whatever the case, Twitter’s aim to become the town square of the internet, which highlights Twitter’s mission to promote and protect the public conversation, was said to be behind the news of its shift to Twitter 2.0.

However, Elon Musk himself tweeted a post revealing some slides from company talks on Twitter at the end of last month, which helped to clear up some of the confusion around Twitter 2.0. Even though no one is certain of the exact date Elon Musk plans to release Twitter 2.0, also known as “The Everything App,” when taken in conjunction with other changes, this suggests that Twitter likely has a bright future. Long-form tweets, video sharing, end-to-end encrypted messages, payments, and the return of Blue Verified accounts are all aspects of this future that define it.

Up until now, Twitter employed the blue checkmark to denote accounts that were active, notable, authentic, and that were of interest to the general public. Twitter had independently verified it and has passed its requirements. Now the blue checkmark may mean two different things: either that an account was verified under the previous verification criteria (active and authentic), or that the account has an active subscription to Twitter Blue.

Elon Musk had originally announced the re-launch of Twitter Blue Verified on the 29th of last month, however, according to one of his most recent posts on Twitter, the re-launch has been postponed. He claims the goal is to make sure there is a high level of confidence that impersonation will be stopped before it is re-launched.

This is a positive step, especially in light of the chaotic situation described as a messy swirl of spoof messages and parody accounts by The New York Times that followed the program’s introduction earlier last month.

Twitter Blue features, with the exception of the blue checkmark, which might take some time to display once you’ve subscribed to Elon Musk’s Twitter blue tick, are immediately accessible. According to a tweet from Elon Musk, some features to anticipate include the option to post lengthy videos and audio, a reduction in the number of advertising, and priority in answers, mentions, and searches. 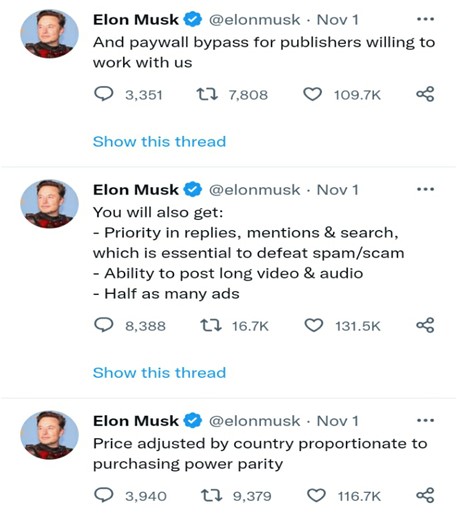 Twitter has announced that it would no longer be accepting applications for the blue Verification check marks under the old requirements (active, notable, and authentic). This is due to the change Elon Musk dubbed – “Power to the People”. This implies that getting Twitter blue verification doesn’t require a person to be a public figure.

All you have to do is purchase active monthly subscriptions to get Twitter blue verification. Only accounts that have a Twitter Blue subscription in good standing are qualified to display the blue checkmark.

Before an account is verified, it must first satisfy specific requirements for the blue checkmark. This is done in an effort to keep the platform’s integrity.

1. Complete: The account must have a profile picture and display name
2. Active use: To sign up for Twitter Blue, the account has to have been active within the last 30 days.
3. Security: When subscribing, the account must be more than 90 days old and have a verified phone number.

4. Non-Deceptive: This requires that there have been no recent alterations to your profile photo, display name, or username, as well as no indications that you have manipulated the platform or sent spam. The checkmark will show up after a manual review and satisfying the requirements. Given the recent halving of its employees, it is currently unknown how Twitter plans to accomplish this manual review.

Twitter advertising offers the largest digital marketing platform for brands. Twitter advertising is one of the most effective approaches for a brand to reach its target audience. With Twitter advertising, a brand can quickly draw attention to its services, goods, and campaigns. Twitter receives positive acceptance from all demographics, in contrast to other platforms that mostly appeal to the younger population.

With Twitter Blue now open to all users under the current “Power to the people” regime, advertising with Twitter Blue appears to be more promising than ever for both Twitter and advertisers. Despite initial concerns about the future of digital advertising on Twitter following Elon Musk’s acquisition of the platform. There were a few reasons for the initial concerns. Twitter blue tick is available to everyone who pays monthly subscriptions. This is under the current “Power to the People” system, rather than just a select group of privileged individuals.

In addition, Twitter lost many paid advertisers who were concerned about hate speech and how it handles content regulation. This was due to Twitter’s plan to introduce a complimentary free speech policy to this Twitter blue regime. In response to these “shocking” changes or the industry shift, others either ceased sponsored advertisements or decreased their Twitter advertising. This led Elon Musk, on Nov. 28, to tweet that Apple Inc. had “mostly stopped advertising on Twitter,” adding: “Do they hate free speech in America?”

Since then, things have changed for the better but the reactions to this whole situation remain emotionally charged. Companies and advertising agencies are taking advantage of this change to raise the bar for their digital marketing. They focus on digital marketing solutions because they are aware that people are paying more attention to Twitter. For any company that can successfully negotiate Twitter’s present agitated social terrains, there are several opportunities. These possibilities are results that the market’s current environment offers brands the chance to profit from.

For instance, the Twitter advertising cost today is the lowest it has ever been. With ad impressions costing or trading at a lower level than before, Twitter is a solid option for digital advertising. The Twitter advertising tool for brands and marketing agencies, Twitter Blue, has never been more effective. A wonderful option for digital marketing is Twitter blue. Marketing agencies use superior service delivery and prioritized support for their clients. While brand awareness and interest are increased by both the marketing agencies and the brands using Twitter blue advertising. A certain way to gain much-needed space on Twitter is to subscribe to Twitter Blue.

Businesses or sponsors are halting their campaigns owing to the resurgence of hate speech, which calls for greater vigilance. Your Twitter ad appearing beside the wrong tweet can damage your brand image. To manage and control all of your media activities, you might need an AI-based social media assistant like Socialays. Socialays AI carries out immediate automatic activities for real-time social media comment analysis. The ultimate goal is to assist you in identifying hateful, malicious, and harmful speeches and spam. It stops them while also classifying comments into questions and analyzing their sentiments to better understand your audience.